Activist Alliance Calls for Justice and Freedom for Palestine

KRjogja.com - June 3, 2010
Yogyakarta -- Demonstrators from the People's Challenge Alliance (ARM) held a protest action at the University of Gajah Mada (UGM) traffic circle in the Central Java city of Yogyakarta on Thursday June 3 calling for the world's people to unite against imperialism for the national liberation of Palestine.
Action coordinator Yuni stated that the Israeli blockade is an effort to weaken the Palestinian people's struggle. To this day however, international institutions such as the United Nations and countries such as Indonesia have failed to take a firm stand to accelerate the peace process in Palestine.
"It needs to be understood that the conflict that is taking place between Israel and Palestine is not a religious or racial conflict. Rather it is a conflict of interests over the control of strategic economic assets by international imperialists through Israel as its puppet", said Yuni.

Read more »
Posted by People's Liberation Party - Indonesia at 19:30 No comments:
Email ThisBlogThis!Share to TwitterShare to FacebookShare to Pinterest

Justice and Freedom for Palestine Now

Stop the slaughter of the Palestine people
Fight Zionism and Israel's political apartheid
Justice and freedom for Palestine now!
Israel's attack on a convey of six ships transporting humanitarian assistance for Gaza, the Freedom Flotilla, in international waters, resulted in the death and injury of civilians from several countries. On one of the ships, the Mavi Marmara, carrying 600 civilian passengers, was stormed in the by Israeli soldiers dropped by helicopter in the pitch-black of night, who attacked using live ammunition. Meanwhile, of course, the passengers, although unprepared, were forced to fight back with whatever came to hand.
The Freedom Flotilla was a mission organised by a coalition of organisations from 50 countries aiming to help break the Israeli blockade of the Gaza Strip that has been in place since 2007. Seven hundred civilian activists from 50 countries set out for Gaza with more than 10,000 tons of drugs, food, medical supplies, building reconstruction equipment and other materials that the people of Gaza can no longer obtain. For a year now the people of Gaza have not even had access to clean water and electricity because of the blockade.
How is it not possible that the attack on the Freedom Flotilla is not being condemned as a shockingly brutal and inhuman act, which has trampled on international law and human rights? It is time for the entire world's people to condemn this act of aggression and build solidarity with Gaza until it is liberated and Palestine can stand tall as an independent country.

Read more »
Posted by People's Liberation Party - Indonesia at 10:20 No comments:
Email ThisBlogThis!Share to TwitterShare to FacebookShare to Pinterest

Political Committee of the Poor-Peoples Democratic Party Statemen
Commemorating the overthrown of Soeharto, May 21, 2010

Let us unite to overthrow the pro-imperialist government of SBY-Boediono and the rotten political elite.
Replace them with a United Government of the Poor!

It has been 12 years since the Suharto dictatorship was toppled, overthrown not by the gun, or an elite conspiracy, but by the power of the mobilised people. But after 12 years of reformasi or political reform, power is still not in the hands of the people, rather it is in the hands of the rotten political elite: the fake reformists and the remnants of the Suharto's New Order regime. Does this mean that Suharto's overthrow in May 1998 was meaningless?

No! Absolutely not! The overthrow of Suharto on May 21, 1998 had great significance for the revolutionary process in Indonesia. This is true despite the fact that Suharto's overthrow through mass mobilisation has NOT YET been able to replace the power of the bourgeoisie, and instead the fake reformists and the remnants of the New Order have returned to power with a different face, although the substance is the same, the oppression of the people by the agents of imperialism.

The significant meaning of Suharto's overthrow as part of the unfinished revolution was: a dictatorship was able to be OVERTHROWN by the UNITY and the MOBILISATION OF THE PEOPLE, albeit (only) through populist demands (corruption, collusion and nepotism). May 1998 is clear evidence that MASS ACTION is tangible form of people's power that organises its resistance; an endeavour to liberate the people from their consciousness as "slaves", the "little people" and the "poor". It was from the momentum of Suharto's overthrow that MASS ACTIONS became a CULTURE, a WEAPON, an effective method of mass struggle, albeit one that is spontaneous in character.
Read more »
Posted by People's Liberation Party - Indonesia at 13:31 No comments:
Email ThisBlogThis!Share to TwitterShare to FacebookShare to Pinterest

Marsinah was a woman worker who was militant and courageous. The worker employed at the PT Catur Putra Surya (CPS) watch factory in Sidoarjo, East Java, was found dead in the Wilangan forest, Nganjuk, on May 8, 1993. Marsinah had not died without reason. The medical examination found that she had died as a result of injuries inflicted during torture. Wounds on her neck and wrists indicated that she had been severely beaten, had suffered internal hemorrhaging and been raped with a blunt instrument before being killed.

Marsinah had been involved in a action together with her co-workers at the factory demanding an increase in the basic wage from 1,700 rupiah to 2,250 rupiah per day and that the government-sponsored yellow trade union the All Indonesia Workers Union (SPSI) be dissolved for failing to side with the working class.

The struggle by PT CPS workers not only attracted opposition from the company but also from the Indonesian military (TNI), in this case the sub-district military command (Koramil), which was mobilised to confront Marsinah and her comrades. Thirteen workers who held the action were arbitrarily arrested by the military. Negotiation between the workers, company management and the Department of Labour were held at the Sidoarjo District Military Command Headquarters (Makodim).
Read more »
Posted by People's Liberation Party - Indonesia at 13:30 No comments:
Email ThisBlogThis!Share to TwitterShare to FacebookShare to Pinterest

'If Working People Want Prosperity They Must Take Power'

Mahardhika News - May 1, 2010 Vivi W -- Commemorating May Day, 5,000 workers from the Workers Challenge Alliance (ABM) held a protest action in Jakarta today against the pro-capitalist administration of President Susilo Bambang Yudhoyono and Vice President Boediono (SBY-Boediono), which have consistently brought suffering to the Indonesian working class. Carrying a huge billboard reading "The solution for Indonesia: Build national industry, nationalise vital national assets under the people's control, repudiate the foreign debt and fight corruption", the ABM protesters rallied enthusiastically from the Hotel Indonesia traffic circle in Central Jakarta in preparation for a march to the nearby State Palace. The demonstrators had been gathering in front of the Niko Hotel since 10am. One by one protesters from labour as well as non-labour organisations affiliated with the ABM arrived from other parts of Jakarta and the satellite cities of Bekasi and Tangerang. At 12noon precisely, the demonstrators led by action coordinator Kamal from the Indonesian Transportation Trade Union of Struggle (SBTPI) moved off towards the Hotel Indonesia traffic circle and then on to the State Palace in Central Jakarta.
Read more »
Posted by People's Liberation Party - Indonesia at 13:25 No comments:
Email ThisBlogThis!Share to TwitterShare to FacebookShare to Pinterest

Jakarta Post - March 29, 2010
Indra Harsaputra , Surabaya -- Activists have accused the police and several religious groups of breaking the law by shutting down a planned congress on sexual orientation in Surabaya, East Java, and by banning conference participants from speaking to the media.
As of Sunday — the deadline given by extremist Islamic groups to foreign participants from 16 countries arriving in the city to attend the 4th regional Lesbian, Gay, Transgender and Intersex Association (ILGA) conference to leave the country — none of the participants have spoken to the press.
Leading gay rights activist Dede Oetomo apologized to journalists for not being able to give a statement, saying the participants’ and organizers’ safety was under threat.
Read more »
Posted by People's Liberation Party - Indonesia at 13:23 No comments:
Email ThisBlogThis!Share to TwitterShare to FacebookShare to Pinterest

Support for the International Lesbian, Gay, Bisexual, Trans and Intersex Association (ILGA) congress that was planned to be held in the East Java provincial capital of Surabaya continues to flow in, although there are many that oppose it.

One of the organisations that supports the congress, the Perempuan Mahardika (Free Women) National Network (JNPM) believes that Surabaya municipal district police is acting undemocratically.

"The rejection, banning and criticisms against holding the ILGA congress in Surabaya is a violation of basic human rights and an undemocratic act," said JNPM spokesperson Sharina in a press release received by Detik.com Surabaya on Wednesday March 24.
Read more »
Posted by People's Liberation Party - Indonesia at 13:21 No comments:
Email ThisBlogThis!Share to TwitterShare to FacebookShare to Pinterest

100 years of the women's struggle for liberation 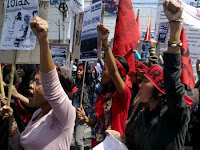 - Women must leave the home
- Fight capitalism, struggle for prosperity and equality
- Replace the SBY-Boediono capitalist government
- Abandon the rotten political elite
- Unite, for a united government of the poor

Women are not just housewives. They are not second class citizens. History shows that in the beginning, the world progressed because humanity (men and women) succeeded in managing nature by creating, using and modernising the tools of labour, so that it resulted in abundant production (surplus). This was done in a way that was equitable -- there were none that had more than others, there was no domination by one gender over the other.

The widespread inequality, oppression, domination, discrimination and the subordination of women, was developed and formalised by the private ownership of surplus production and the means of production (class). And this did not occur all at once (by nature or predestination). Injustice against women is a human creation because of class and patriarchy, so, it can also be changed by humanity itself.