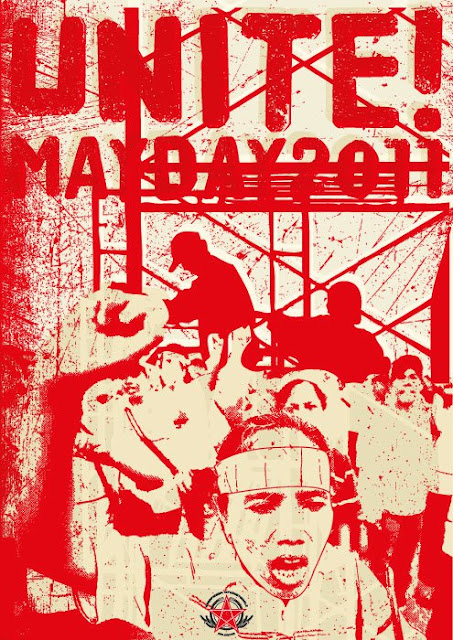 Posted by People's Liberation Party - Indonesia at 22:31 No comments:
Email ThisBlogThis!Share to TwitterShare to FacebookShare to Pinterest 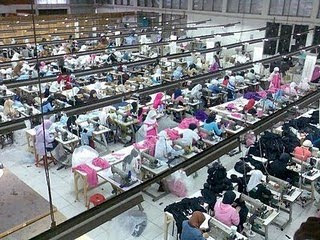 Elisabeth Oktofani -- Mulyadi is 25, but he's lost count of how many times in the past three years he has switched factories.

He works in one for a few months before moving to another, all within Jakarta's massive Kawasan Berikat Nusantara industrial estate in the Cakung-Cilincing area.

Thousands of contract factory workers are employed at the KBN in any given year. Some of those workers have worked within the KBN for more than a decade, despite regulations aimed to prevent it.

"I work mostly for garment factories. The money's the same everywhere at KBN. I earn Rp 1.38 million [$160] per month," Mulyadi told the Jakarta Globe.

"Why do I move around? Not by choice, I can tell you. They'll just give me a three-month contract or a six-month contract. That's a lot pressure for us [to turn down the offer], because we know how hard it is to get jobs nowadays," he said on Friday, two days before May Day demonstrations are expected to hit the capital's streets.

Land conflicts between the TNI and the people rooted in 1965


Jakarta -- Conflicts between the Indonesian military (TNI) and the people shows that internal reform within military as an institution is not fully complete. The security approach, like the era of Suharto's New Order regime, is still being used by the TNI, particularly when confronted by problems.


Speaking in Jakarta on Sunday April 24, The Indonesian Institute researcher Hanta Yuda said that the conflicts that have occurred between the TNI and the people are evidence that a number of agenda items still remain in the reform of the TNI. "The indication being that the TNI still uses violent methods to overcome problems, as it did during the previous New Order era", said Yuda.

Read more »
Posted by People's Liberation Party - Indonesia at 16:46 No comments:
Email ThisBlogThis!Share to TwitterShare to FacebookShare to Pinterest

Since Saturday April 16, 2011 several farmers have been injured by military violence in Kebumen regency, Central Java. The actions of the military personnel included beating, kicking and shooting, allegedly with rubber bullets caused several persons injured. Ten villagers were arrested after they protested against the occupation of their land by the military. On April 16, 2011 several villagers joined a procession to the graves of child victims of past military exercises in the area. Provocation by the local military escalated the situation. Some of the victims were brought to hospitals and many left the area due to fear of further violence by the military and police. The Asian Human Rights Commission (AHRC) is concerned about the ongoing arrests and sweeping operations in the area.
Read more »
Posted by People's Liberation Party - Indonesia at 14:40 No comments:
Email ThisBlogThis!Share to TwitterShare to FacebookShare to Pinterest

By James Balowski, in Jakarta
Direct Action. The gruesome murder of three members of the Ahmadiyah religious sect by an Islamist mob  has left Indonesia’s image of pluralism and religious tolerance in tatters. On February 6, a mob of 1500 people attacked 21 Ahmadiyah members in Cikeusik, a village in Banten province in Java, killing three and seriously wounding five others. Around 30 police officers were present but did little to stop the attack. An amateur video posted on YouTube shows the gruesome beating of the men with wooden sticks, hoes and machetes.


The public outcry was immediate and loud, condemnation coming from ordinary Indonesians, moderate Muslim leaders, NGOs and rights activists. Human rights NGO Imparsial condemned the police inaction: “Once again, the police, as a state apparatus, failed to guarantee religious freedom by protecting the Ahmadis from violence”. The Wahid Institute blamed President Susilo Bambang Yudhoyono: “Violence against Ahmadis is an almost daily occurrence, yet the President does nothing to address this”.

Read more »
Posted by People's Liberation Party - Indonesia at 21:23 No comments:
Email ThisBlogThis!Share to TwitterShare to FacebookShare to Pinterest

Against the France based company: Student solidarity against PT. Weda Bay Nickel 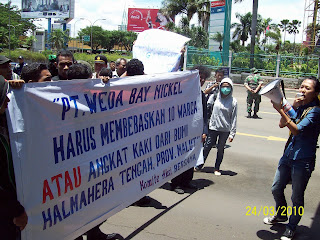 Article 33 of the 1945 Constitution mandates that the country's natural wealth, mining, forestry products, plantations and agriculture, as well as the sea's riches throughout the territory of Indonesia be managed in the interests of the people's. The reality however is exactly the opposite. The capitalist economic system that is in effect in Indonesia ensures that the profits from the management of natural resources are the sole property of the capitalist class.

PT. Weda Bay Nieckel is a mining company that for 17 years has managed a nickel mine in Weda, Central Halmahera regency, North Maluku province. Between 1993 and 2011, the French based company has employed thousands of mine workers as contract, permanent daily workers and daily casual workers.