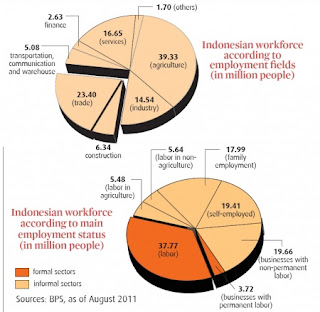 Founded by the icon of the labor movement, Muchtar Pakpahan, many people still associate the organization with Pakpahan even though he has not been involved in the organization’s day-to-day management for the past few years due to his advancing years and declining health.

Established in 1992, the SBSI (before the confederation was formed) became an alternative organization for labor activists who felt dissatisfied with the performance of the government-sanctioned All Indonesian Workers Union (SPSI), which had been strongly co-opted by retired generals and government officials.

Read more »
Posted by People's Liberation Party - Indonesia at 19:09 No comments:
Email ThisBlogThis!Share to TwitterShare to FacebookShare to Pinterest

JAKARTA, Indonesia — Indonesia, the world's most populous Muslim-majority nation, is often held up as a shining example of how democracy can gel with moderate Islam.But the freedoms that have given the country its reputation, and that many Indonesians enjoy, have also allowed for the hardline Islamic Defenders Front, a vigilante group known for raiding bars and nightclubs, to flourish over the last decade.The group's tactics — which are often violent — have bothered many citizens since its founding in 1998. They say they are concerned the group, known locally as the FPI, could tarnish the country's image after years of heavy-handedness and intimidation. But rarely have Indonesians taken a public stand against it.Until now, that is.
Read more »
Posted by People's Liberation Party - Indonesia at 19:22 No comments:
Email ThisBlogThis!Share to TwitterShare to FacebookShare to Pinterest

Social upheavals triggered by public distrust in the state - Survey


Yohan Wahyu -- Most of the recent social upheavals have been triggered by a decline in public trust in the state. Public pessimism towards the government's performance has stimulated the emergence of several mass movements, from solidarity actions through to the social media and mass blockades.


This public mistrust in the state was revealed in a Kompas survey conducted in 12 major Indonesian cities. Eight out of 10 respondents agreed that the performance of the states three principle institutions -- the executive, legislative and judicial wings of government -- were dissatisfactory.

Read more »
Posted by People's Liberation Party - Indonesia at 21:41 No comments:
Email ThisBlogThis!Share to TwitterShare to FacebookShare to Pinterest