March 17, 2011
On March 11, at 2:30 PM (JST), the tremendously powerful earthquake of magnitude 9 hit the vast area of Eastern Japan, comprised of Northeast and Kanto regions. The earthquake gave rise to the formidable tsunami, and the latter devastated numerous cities and towns all along the Pacific coast from the northernmost prefecture of Aomori to the southern Chiba prefecture. At the time of March 17, the number of deaths and missing persons is already close to 20,000, and the number continues to increase.
Read more »
Posted by People's Liberation Party - Indonesia at 14:35 No comments:
Email ThisBlogThis!Share to TwitterShare to FacebookShare to Pinterest

Fighting for women's rights in Indonesia 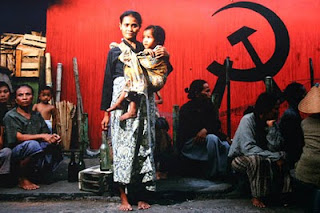 Zoe Kenny -- The story of women in Indonesia is inseparable from the development of the Indonesian nation itself. Indonesia was swept up in the global wave of anti-colonial national liberation movements in the mid-20th century, declaring its independence in 1945 after almost 350 years of Dutch colonial rule. The key leader of Indonesia's national liberation struggle, Sukarno, went on to became the country's first president.

Sukarno's presidency was characterised by his desire to develop the country in an independent direction, politically and economically. Sukarno was one of the founding members of the Non-Aligned Movement, which included other important Third World countries such as India and Egypt, and which aimed to forge a third path through the Cold War between the US-led capitalist camp and the Soviet Union. Sukarno's progressive, independent stance was broad enough to encompass friendly relations with the huge and popular Communist Party of Indonesia (PKI), which at the height of its influence had more than 20 million members.
Read more »
Posted by People's Liberation Party - Indonesia at 17:47 1 comment:
Email ThisBlogThis!Share to TwitterShare to FacebookShare to Pinterest

Discrimination and violence against women on the rise: Komnas Perempuan

Jakarta -- The institutionalisation of discrimination based on gender, ethnicity, religion and beliefs is causing women, particularly those from minority groups, to progressively lose their sense of security. The terror that they face includes threats to life.

"Since 1999 up until early March 2011 there were 195 discriminatory policies found at the national, provincial and regency level", said Arimbi Heroeputri from the Monitoring Division of the National Commission on Violence Against Women (Komnas Perempuan) during the launch of Komnas Perempuan 2010 Annual Report in Jakarta on Monday March 7. This, the 10th annual report by Komnas Perempuan marks the 100th commemoration of International Women's Day on Tuesday March 8.

Read more »
Posted by People's Liberation Party - Indonesia at 11:03 No comments:
Email ThisBlogThis!Share to TwitterShare to FacebookShare to Pinterest Zely Ariane[1]
2011 International Womens Day. International women day is still largely unknown  among Indonesian women when compared with 1st May to Indonesian workers. This  is not very surprising since the struggle for  the liberation of women only developed several years after reformasi[2], with its  mushrooming of different kinds of women's organizations, communities, NGOs, research institutions, women's legal aid etc.,  that openly advocated women's social and political rights.
Before reformasi, for 33 years the Indonesian people lived under the dictatorship of Soeharto who destroyed politically and organizationally the ideas of women's liberation and equality. Not only killing the ideas, the regime also killed and imprisoned thousands of women activists from Indonesian Women Movement (Gerwani) in 1966. Soeharto maintained the idea that women are the counterpart of men and the kind of organizations that were introduced were “housewives” organizations and family welfare groups.
Read more »
Posted by People's Liberation Party - Indonesia at 10:52 1 comment:
Email ThisBlogThis!Share to TwitterShare to FacebookShare to Pinterest
Newer Posts Older Posts Home
Subscribe to: Posts (Atom)