It is thought that up to 500,000 people died in the purge targeting the left, sparked by an attempt to overthrow the country's founding President Sukarno.

Read more »
Posted by People's Liberation Party - Indonesia at 20:07 No comments:
Email ThisBlogThis!Share to TwitterShare to FacebookShare to Pinterest

The PRD Diaspora, 16 Years On

Although this article is a little dated, I thought it might still be of interest to readers – JB.

Laurencius Simanjuntak -- The revolutionary ideals of the People's Democratic Party (PRD) founded 16 years ago were thwarted. The New Order regime of former President Suharto in a rage of fury obliterated the party only a few months after it was declared on July 22, 1996. PRD leaders and cadre in the regions were hunted down, abducted, tortured and jailed.

Several among them have never "returned home" to this day. They include Wiji Thukul, Petrus Bima Anugerah, Suyat and Herman Hendrawan, who were among the 13 people that were abducted by the army's elite Special Forces Kopassus in 1997-1998. However not all the stories of former PRD activists are as grim as Wiji Thukul and his comrades.

Government does not need to acknowledge 1965 crimes: NU youth wing

Aditya Revianur, Jakarta -- The chairperson of the Anshor Youth Movement (the youth wing of the Islamic mass organisation Nahdlatul Ulama), Nusron Wahid, says that the government does not need to acknowledge past gross human rights violations, particularly the humanitarian tragedy in 1965-1966.

Read more »
Posted by People's Liberation Party - Indonesia at 19:44 No comments:
Email ThisBlogThis!Share to TwitterShare to FacebookShare to Pinterest

Aditya Revianur, Jakarta -- The Nahdlatul Ulama's Central Board (PBNU) with the support of retired army officers and mass organisations is strongly opposed any form of apology by the government or the Indonesian president for the 1965-1966 tragedy.

Read more »
Posted by People's Liberation Party - Indonesia at 19:30 No comments:
Email ThisBlogThis!Share to TwitterShare to FacebookShare to Pinterest 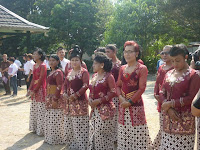 Starting with a reflection on the struggle for liberation and a sense of nationalism, the Yogyakarta Network for Human Rights and Diversity (Jamgaman) held a flag rising ceremony. Scores of Jamgaman activists, including members of the lesbian, gay, bisexual and transgender (LBGT) community, along with church leaders could be seen underneath the sun's intense heat singing and honoring the raising of the flag.

Read more »
Posted by People's Liberation Party - Indonesia at 19:22 No comments:
Email ThisBlogThis!Share to TwitterShare to FacebookShare to Pinterest

Who are benefited from Indonesia growth?

Strong economic growth not accompanied by rising living standards
Jakarta– In the midst of a global crisis, Indonesia's economic growth recorded a positive result. Economic growth for the second quarter of this year reached 6.4 percent compared with the same period last year.

By James Balowski, in Jakarta

After a three-year investigation and testimonies from 349 witnesses, Indonesia’s National Human Rights Commission (Komnas HAM) has declared that the systematic prosecution of alleged members of the Indonesian Communist Party (PKI) when former president Suharto and the military seized power in 1965 constituted gross human rights violations. It urged that the military officers involved be brought to trial.

Speaking at a press conference on July 23, Nur Kholis, the head of the investigative team into what is officially described as a coup attempt by the PKI, said that state officials under the Operational Command for the Restoration of Security and Order (Kopkamtib) who served from 1965 to 1967 and between 1977 and 1978 should be tried for crimes including murder, extermination, slavery, eviction or forced eviction, deprivation of freedom, torture and mass rape. Kholis said that his team had handed over the 850-page report to the Attorney General’s Office (AGO) and “hoped that the AGO would follow up the report”.
Read more »
Posted by People's Liberation Party - Indonesia at 10:53 No comments:
Email ThisBlogThis!Share to TwitterShare to FacebookShare to Pinterest

Militarist party positioning itself in Indonesia

The political party Greater Indonesia Movement (Gerindra) recently announced its 314-strong leadership structure. Gerindra is headed by Suharto era general and son-in-law Prabowo Subianto. Subianto was forced out of the army in 1999 after he was accused of masterminding the kidnapping and disappearance of student activists in 1997 and 1998. At that time, he was head of the Strategic Army Command and was endeavouring to save the Suharto dictatorship as it came up against increasing resistance from a student-led mass protest movement.
East Timorese human rights and solidarity activists have also accused Subianto of being responsible for massacres and torture in East Timor during the Indonesian occupation. Information from the East Timor Alter Network (ETAN) connects him with the 1983 Kraras and 1991 Santa Cruz massacres.